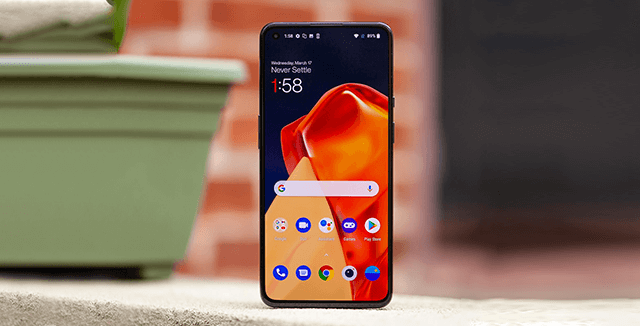 With all the OnePlus 9 Pro's attention, it is pretty easy to forget its sibling OnePlus 9, which is more affordable. It has a powerful Snapdragon 888 chipset. The price of the phone is around 730 dollars and is a good value for money, which we will talk about later in this blog.  But the question is, should you buy this phone? Don't fret. Today, we will give a review of the OnePlus 9. Let's get started.

When you take a first look at the OnePlus 9, it will give you a feeling of deja vu. The phone has a lot of similarities with the OnePlus 8t. It has a reinforced plastic frame of high quality that can easily fool people into thinking it is metal and has gorilla glass 5 on both sides. It is a bit smaller than the OnePlus Pro. The phone is around 10 grams lighter in the Asian markets than in Europe and North America, possibly due to the wireless charging support. The phone comes with three colour options.

One factor that might disappoint you is that it is not an IP68 rating, but it does have some level of protection from dust and water. There is also an optical reader which works perfectly accurate and fast. The display lies flat on the front, and there is a tiny punch hole in the corner with slim bezels all around. But the system can get a bit confused and unlock a little slower if you switch fingers, even if they both are registered.

While the OnePlus 9 doesn't come with the LTPO screen like the Pro, the display is still imposing. The display is very much identical to the OnePlus 8t. The set has a 6.5-inch fluid 8-bit AMOLED panel with a Full HD resolution and a 120 Hertz refresh rate. The phone has phenomenal colour accuracy. The display achieved 100% coverage in both p3 colour spectrums and sRGB.

You have the option to switch between the vivid or natural colour modes. You can lower down the high refresh rate to save power, but since it is not an LTPO display like the OnePlus Pro, it won't go down to one Hertz. It is good to keep the settings to the natural mode at 821 nits, where the brightness is great. The phone’s display refreshes at 120 Hertz when you are interacting, and when you are not, it will drop down to 60 Hertz. A major downfall is that OnePlus lacks support for high refresh rate gaming.

The OnePlus 9 has a stereo speaker setup with a dedicated loudspeaker located at the bottom and the earpiece as a second channel as far as the audio is concerned. The set gives pretty much the same results as the OnePlus 9 Pro on the loudness test.

One thing that might draw you towards this phone in the first place is the software. The OnePlus 9 features Android 11. The software is clean with a lot of extra functionality. The phone also has a feature called turbo boost 3.0, which allows 25% more apps to run in the background. The phone’s UI was first seen on the OnePlus 8t. The Oxygen OS has large displays that we have seen from the last couple of years. This eases in handling the phone one-handed. The software and Ul are quick and smooth. Plus, you get ample customization options. You can change the system icons, the ambient display, the font, and the accent colour. Swipe down to any area of the home screen to access the OnePlus shelf.

Like its sibling, The OnePlus 9 is one of the first devices to come with Qualcomm's new snapdragon 888 chipsets. The phone comes with either 8 or 12 LPDDR5 rams that OnePlus claims can run up to 6000 megabits per second. It also has a UFS 3.1 flash storage and comes with 128 or 256 GB. The copper materials and thicker graphene used inside the phone help dissipate the heat towards the frame. To sum it up, the OnePlus 9 comes with tons of power and is ahead of many 888 power phones. The phone can easily handle heavy-editing apps, extensive apps, and other day-to-day tasks.

What's interesting is the fast charging. The phone gets 65-watt fast charging with the wrap charge of 65t. This means the phone gets to 100% in just 29 minutes. The set also has the option of 50-watt wireless charging and reverse wireless at up to 5 watts, though the option is limited to North America and Europe. The phone has a 4500-milliamp power battery consisting of two cells. Despite the battery size, it gives an average endurance of 87 hours.

The best and the most intriguing part of the device is the camera setup. You will see some design differences in the phone. You can change the white balance, ISO, and other parameters too. But most of the in-app changes are in the pro mode. The OnePlus 9 has a 48-megapixel main sensor with omnidirectional Phase Detection Auto-Focus (PDAF), a 50-megapixel ultrawide camera, and a 2-megapixel depth sensor.

The OnePlus 9 ultrawide camera can record 8K footage with 30 frames per second. However, the video is upscaled with a lower resolution image. In short, the 8K footage seems pretty annoying when compared with the 4K footage version. So, it is better to stick with the lower version to not compromise the quality, as the 4K video footage is great. The 4K video version has a lot of details with a dynamic range.

The OnePlus 9's ultrawide shots are superior to its previous versions. The sensor captures a vast amount of detail as there will not be any distortion. The straight lines will appear straight in the corners and edges of the shot. In short, you can expect a ton of noise, over-sharpening, and crushed shadows. You can't save the shots when using the pro mode with this camera. The phone does not have a dedicated telephoto lens and performs a digital zoom instead. There is no Optical Image Stabilization (OIS) in the OnePlus 9's main camera, and it is very obvious with zoom shots.

All in all, the OnePlus does not disappoint. The phone gives accurate colours, good details, and nice exposure even without the nightscape. The OnePlus 9 Pro has a bit more detail, though. However, the two are almost identical when you turn on the nightscape. The images look excellent with good detailed colour and exposure. The OnePlus 9 new ultrawide lens is certainly the way to go, as the pictures look great under most conditions.

The OnePlus 9 has a pretty decent image quality. Pictures have a decent amount of details. The phone has increased sharpening to compensate. Some textures can turn soupy in lower frequency detailed areas. Images are noisier and don't look great when you crop them in. Colours are okay, having a more realistic look. Though they show saturated green during bright light, overall look neutral during the day and better skin tones. It is an obvious improvement over the OnePlus 8t. The dynamic range is more restricted to some of the competition. Shadows might seem to be a bit darker despite the balanced highlights.

The set shoots portraits only with the main camera. The default portrait mode is zoomed in slightly to minimize distortion. The background blur is a bit aggressive. You can use the ultra-camera for macro shots, and as a whole, the phone takes quite impressive macro images. However, the camera can't get close to the subjects as its competitors.

The phone has a 16-megapixel fixed-focus snapper at the front and gives a decent colour performance, a nice level of detail, and adequate dynamic lighting during the day. Selfie portraits are good, but you might encounter the same issues with the blur on the main camera.

The feature gap between the OnePlus 9, Pro and the non-pro versions is getting bigger. It's acceptable to miss the extra camera and a slightly nicer screen of its sibling. The major upgrades that you will certainly like in the phone are its design and software. Though, the OnePlus 9 also doesn't have certified water protection, no tele camera, a downgraded main sensor from the OnePlus 9 Pro. But the phone has a strong and powerful chipset, a pretty nice screen, a good camera set, and blazing fast charging. So, if you do decide to check it out, also make sure to check out the OnePlus 5G and OnePlus Nord 5G. And we also definitely be checking out the OnePlus 10 after its release, which is expected to come with 6.55 inches (16.63 cm) display, having a resolution of 1080 x 2400 pixels.